This is the moment a daredevil man tried to break a beer bottle on his forehead – and spectacularly fails.

Michael Sawyer, 55, was dared to smash the Budweiser bottle over his head for £20 by pal Gordon Taylor, 59.

The video, filmed by his friend Gordon Taylor, a minibus driver, shows the West Yorkshire cab driver brace himself for the moment the lager bottle shatters on his forehead. 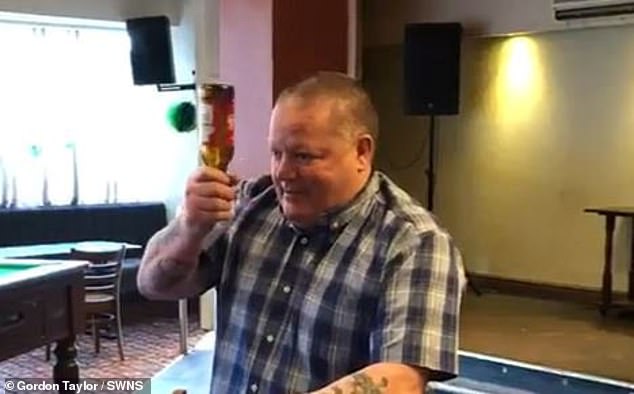 After a few deep breaths, Mr Sawyer bashes the glass bottle against his head

After a few deep breaths, Mr Sawyer bashes the glass bottle against his head.

The 40-strong crowd is greeted with a comical noise as the bottle hits his forehead an fails to break.

The bar breaks into rapturous laughter as the 55-year-old walks away holding his head.

A red-face Mr Sawyer paces around as the laughter continues, as checks for blood on his head while managing to see the funny side.

Best mate of 20 years Gordon Taylor, who lived on Michael Sawyer’s street in Pudsey for around 10 years, said he and four other friends met up for their usual session on Wednesday evening. 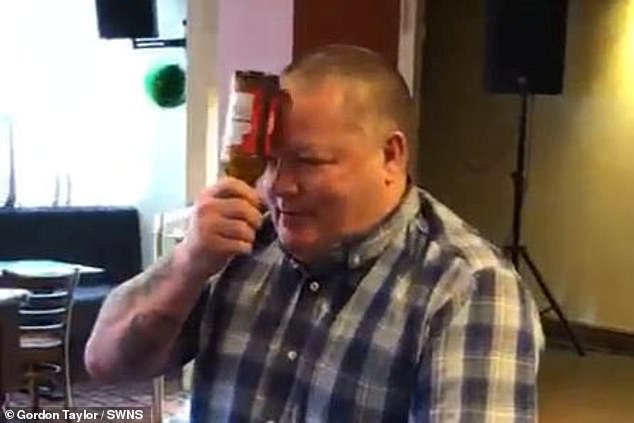 He randomly dared his pal after the cabbie finished his bottle of Bud, and apparently said: ‘I bet you can’t break this over your head for 20 quid’.

Mr Sawyer, according to Mr Taylor, said ‘It’s easy’ – before failing the feat on May 22 at around 9.30pm in the Pudsey Tavern, Pudsey.

Mr Sawyer plans to raise money for Air Ambulances UK next week by drinking nine pints of lager and eating nine pork pies – rounded off by a pint of lemonade – in an hour.

He’s apparently not allowed to throw up either.

Mr Taylor said he thinks it’s ‘ironic’ that Mr Sawyer is raising money for the emergency service, because ‘he’ll need an ambulance by the end of that’.