China has drafted new religious rules aimed at foreign residents in the country as the ruling Communist Party continues to crack down on organised spiritual activities to cement its leadership.

The proposal calls for restrictions on non-Chinese nationals to stamp out ‘religious extremism’, according to a draft posted by the government online.

It also vows to prohibit actions that would ‘undermine China’s national and ethnic unity’ or lead to terrorist activities. 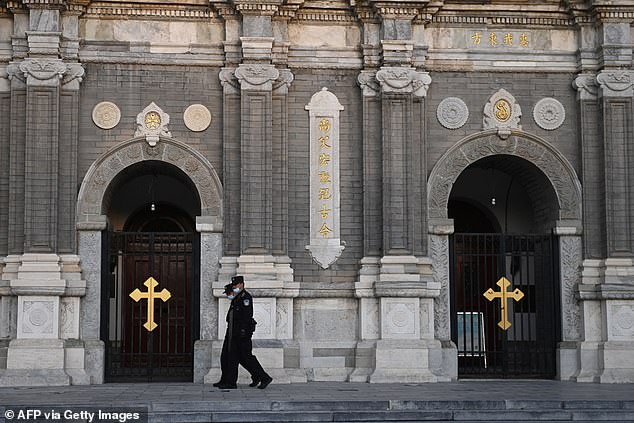 The draft was released by the State Administration for Religious Affairs on November 18, and are currently open to public feedback.

It requires all foreign residents in the nation to adhere to the Chinese laws and respect China’s policy of handling its religious affairs independently.

It allows overseas worshipers to pray in religious venues, including temples, mosques and churches but forbids foreigners from setting up official religious groups, organisations, venues or institutions.

The document highlights that foreigners can preach in China under officials’ invitation. However, they must not have thoughts and actions that are ‘hostile’ towards China. 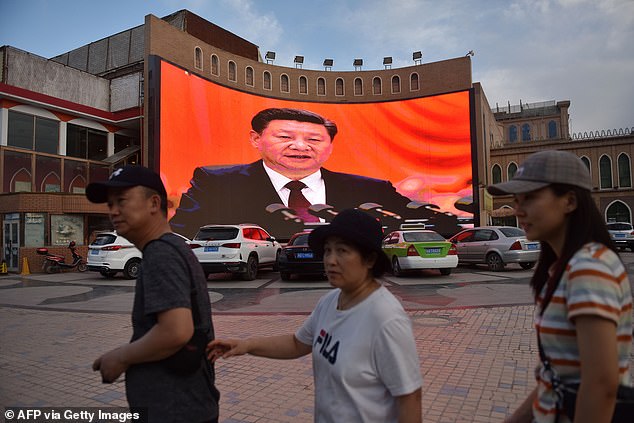 Beijing has tightened restrictions on religions seen as a challenge to the authority of the ruling Communist Party since President Xi took office in 2013. This photo taken on June 4, 2019 shows people walking past a screen showing images of President Xi in Kashgar, Xinjiang

China’s constitution guarantees religious freedom, but since President Xi Jinping took office in 2013, the government has tightened restrictions on religions seen as a challenge to the authority of the ruling Communist Party.

The government has cracked down on underground churches, both Protestant and Catholic, and established the so-called ‘re-education camps’ for Muslims in the far-western province of Xinjiang.

The news comes as China yesterday criticised Pope Francis over a passage in his new book in which he mentions suffering by China’s Uighur Muslim minority group.

‘People of all ethnic groups enjoy the full rights of survival, development, and freedom of religious belief,’ Zhao said at a daily briefing.

Zhao made no mention of the camps in which more than one million Uighurs and members of other Chinese Muslim minority groups are believed to have been held. 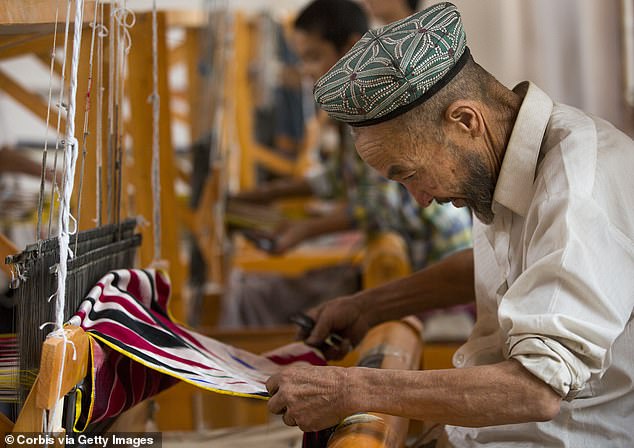 Over one million Uighurs and members of other Chinese Muslim minority groups are believed to have been held in Muslim ‘re-education’ camps in the far-western province of Xinjiang. Pictured, a Uyghur man works in a silk factory in Hotan, Xinjiang, on September 18, 2012

The US and other governments, along with human rights groups, say the prison-like facilities are intended to divide Muslims from their religious and cultural heritage, forcing them to declare loyalty to China’s ruling Communist Party and its leader, Xi Jinping.

China, which initially denied the existence of the facilities, now says they are centres intended to provide job training and prevent terrorism and religious extremism on a voluntary basis.

In his new book ‘Let Us Dream,’ due December 1, Francis listed the ‘poor Uighurs’ among examples of groups persecuted for their faith.