‘It just keeps getting worse’: Disney epic Mulan under fire over human rights

Disney epic Mulan is under fire for working with a Chinese security bureau responsible for detaining members of a Muslim minority to shoot the $274 million action film.

Disney had hoped the film would drive viewers to its new streaming service Disney+ as COVID-19 halted cinema screenings around the world, but the production has now been hit by multiple controversies after lead actor Liu Yifei backed Hong Kong's police crackdown on pro-democracy protesters in Hong Kong. 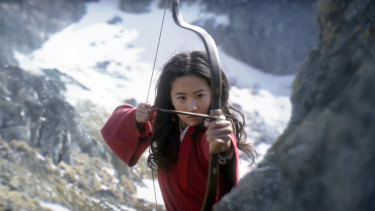 Liu Yifei in the title role of Mulan. Credit:Disney

The remake of the popular animated film, partly shot in Xinjiang in north-western China, gave two high-powered Chinese Communist Party authorities "special thanks" in the credits.

The Turpan Muncipal Bureau of Public Security is responsible for running "re-education camps" for the Uighur persecuted minority in Xinjiang, where up to 1 million people have reportedly been detained as part of a push to assimilate the population into a single Chinese-identity.

The Xinjiang Uighur Autonomous Region Committee is tasked with refuting claims from human rights groups that the Chinese government's actions amount to a cultural genocide.

Both authorities are credited in the film, which is based on a 6th century Chinese folk-tale of a young woman who disguises herself as a man to fight with the Chinese emperor's forces against northern nomadic tribes.

"It just keeps getting worse," said Hong Kong pro-democracy activist Joshua Wong on Tuesday. "Now, when you watch Mulan, not only are you turning a blind eye to police brutality and racial injustice, you're also potentially complicit in the mass incarceration of Muslim [Uighurs]."

The Chinese government has faced allegations of forced labour, sterilisation and separation of children from their parents throughout the region, as it implements a vast security apparatus to monitor the population through camera and police checks.

It maintains the re-education camps are designed to stamp out violent extremism and has urged foreign powers to stay out of what it claims is a domestic issue.

Chinese authorities are now increasingly turning their attention to inner-Mongolia, another semi-autonomous region in northern China, where wanted posters have been issued for parents who have protested the replacement of local language classes in the school curriculum.

"Local authorities at all levels are threatening parents who continue to keep their children home with termination of employment, expulsion from their positions, confiscation of property, and cutting of social benefits," said Enghebatu Togochog, the director of the Southern Mongolian Human Rights Information Centre.

Hollywood has previously come under criticism for censoring films to get access to the Chinese market, which is forecast to become the world's most valuable box office. In August, a report by writers association PEN America found a Taiwanese flag had been removed from the jacket of Tom Cruise in his forthcoming film Top Gun: Maverick. Brad Pitt's 2013 film World War Z changed the origin of a Zombie-inducing virus from China after pressure from Paramount Studio executives.

The rising criticism of the industry comes amid a sharp divide between the US and China on the future of the internet and communications. Diplomatic relations have deteriorated throughout 2020 over disputes about the coronavirus, trade, the South China Sea, Hong Kong and Xinjiang.

The White House has been lobbying for a "clean network" that would carve off popular Chinese social media apps like TikTok and WeChat from western internet networks.

China's Foreign Affairs Minister Wang Yi on Tuesday accused the US of coercion.

"This is a naked act of bullying and should be opposed and rejected."