Kuala Lumpur: Malaysia's Prime Minister Muhyiddin Yassin on Monday said he will self-quarantine for 14 days after a minister who attended a high-level government meeting to discuss coronavirus developments on Saturday tested positive for COVID-19.

The south-east Asian country has seen a steady climb in cases in the past week in the aftermath of an election in the state of Sabah in Borneo on September 26. 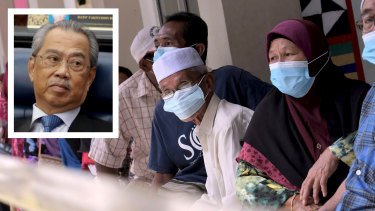 Malaysian PM Muhyiddin Yassin (inset). The country has seen a steady climb in cases in the past week in the aftermath of an election in the state of Sabah in Borneo last month.Credit:AP

Authorities in Malaysia have warned that coronavirus restrictions may have to be reimposed if the trend continues, amid popular anger towards politicians who have been blamed for the spike.

In a statement, Muhyiddin confirmed that Religious Affairs Minister Zulkifli Mohamad Al-Bakri had tested positive, and that those identified as close contacts at Saturday's National Security Council meeting to discuss COVID-19 had been issued a 14-day home surveillance order starting October 3.

"Pursuant to that, I will undergo self-quarantine at my home for 14 days as advised by the health ministry," Muhyiddin said.

"However, this will not interrupt government business. I will continue to work from home and use video conferencing to conduct meetings as necessary."

In an earlier statement, the health ministry said contact tracing had been carried out, including symptom screening and collection of swabs to detect COVID-19 infections.

In a Facebook post on Monday, Zulkifli confirmed that he had tested positive for COVID-19 and was now undergoing treatment.

Other world leaders in quarantine

Muhyiddin was one of a string of world leaders to on Monday announce they were quarantining. European Commission President Ursula von der Leyen said she would self-isolate after attending a meeting with someone who tested positive.

Von der Leyen last week took part in a special meeting of Portugal’s state council in the coastal town of Cascais, on the outskirts of Lisbon. State councillor António Lobo Xavier tested positive for the virus on Sunday.

Separately, Lithuanian Foreign Affairs Minister Linas Linkevicius said he would self-isolate for a week after contact with members of visiting French President Emmanuel Macron’s delegation who later tested positive for the coronavirus.

Neither the French president nor his wife were among those to test positive.

The Trial of Alexander Vinnik, an Alleged BTC Thief, Has Begun

Funds Are Safe Says Okex CEO! Yet Withdrawals Awaits to be Resumed

China's billionaires see biggest gains ever, adding more than $1.5 trillion to their fortunes

The Trial of Alexander Vinnik, an Alleged BTC Thief, Has Begun