New powers to detain people considered a high risk of negligently spreading COVID-19 are set to be debated in State Parliament this week.

The Victorian government could also enlist protective services officers and WorkSafe inspectors to enforce public health directions under the proposed law, which extends one-off changes made in April for another six months. 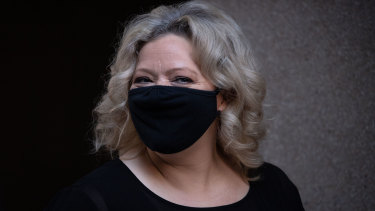 People suspected by health authorities of being likely to spread the virus if they are COVID-positive or a close contact of an infected person could be forcibly detained if the bill is passed.

The rules, confirmed to The Age by a state government spokesman, could be applied to conspiracy theorists who refuse to self-isolate or severely drug-affected or mentally impaired people who do not have the capacity to quarantine.

Those caught under the new rules could be detained in places where they could be monitored, such as hotels.

The Omnibus (Emergency Measures) Bill proposes new powers the government says will strengthen the state's pandemic response, including broadening the types of government employees who can act as authorised officers.

The state of emergency and state of disaster, which were extended on Sunday until October 11, allow the officers to detain any person "for the period reasonably necessary to eliminate or reduce a serious risk to public health". The officers can also restrict movement, search premises without a warrant and give other directions that are deemed necessary to protect public health.

In a statement, Attorney-General Jill Hennessy said the temporary changes "allow us to continue responding to the challenges the pandemic presents, so we can keep protecting Victorians and delivering the services they rely on."

Existing changes that will be extended for six months in the proposed bill include the ability to make procedural changes by government regulation rather than legislation, ability to extend family violence orders, online hosting of local council meetings and parliamentary committees, judge-only trials and extending the notice period for long-term injured workers who are due to transition off WorkCover weekly payments until 31 December 2020.

The bill proposes to extend the period of time for which a family reunification order can be made. It will also allow Magistrates Court and Children's Court registrars to change the date and locations of proceedings to reduce pressure on the court system.

On Sunday, the government extended the state of emergency and state of disaster for another four weeks, ending at 11.59pm on October 11.

Earlier in the month, the state government passed a law to allow it to continue declaring four-week emergency declarations for another six months.

Victoria has both a state of emergency and a state of disaster in place. The state of disaster, which expires on September 2, grants additional powers to the Minister for Police and Emergency Services, Lisa Neville, to control and restrict entry, movement within and departure from a disaster area – in this case, the whole state – and to direct government agencies and allocate resources to enforce these restrictions.