Home » World News » Pharrell Williams’ cousin had gun when he was shot dead by officer: cops

Pharrell Williams’ cousin had gun when he was shot dead by officer: cops 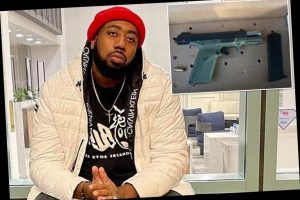 Miley Cyrus’ musical influences are a who’s who of rock

This is the gun Virginia police say Pharrell Williams’ cousin was brandishing when he was fatally shot by an officer — the same weapon officials insist he was seen holding “earlier in the evening.”

The Grammy-winning singer’s relative Donovan Lynch, 25, was killed Friday night just a block from a shooting that injured eight people in Virginia Beach.

Local activists initially insisted Lynch had been unarmed, and on Saturday Virginia Beach Police Chief Paul Neudigate only said that a firearm was found “in the vicinity” of the shooting.

But late Monday the department released photos of the weapon while insisting all the officers involved have told investigators that the former college football player was holding the gun at the time he was hit.

The officer who fired the fatal shot as well as a colleague who witnessed it “both … report that Mr. Lynch was brandishing a handgun at the time of the shooting.”

“An independent witness corroborated that Mr. Lynch was in possession of a handgun earlier on the evening of March 26,” the department said in a statement.

The force offered no further details in exactly what Lynch is accused of doing before the officer — who has not been identified — opened fire.

“The specific actions which resulted in the shooting are part of the ongoing criminal investigation,” the department said in a statement.

The department still faces outrage after Neudigate confirmed that the officer’s bodycam was not switched on at the time “for unknown reasons.”

“We would like to provide the community answers. At this point we do not have them,” the police chief said.

In his tweet confirming that his relative was the man killed, Pharrell said, “It is critical my family and the other victims’ families get the transparency they deserve.”

“The loss of these lives is a tragedy beyond measure,” he wrote.

His cousin, a Virginia Beach resident, had been an offensive lineman for the University of Virginia’s College at Wise during the 2017 and 2018 seasons and a 2019 graduate of the school.

In a damning statement Sunday, the Virginia Beach chapter of the NAACP said it was “not surprised” that the body camera was not activated.

“We are watching and listening for the department’s inquiry into this shooting and expect a thorough and expeditious report,” the NAACP’s statement said. “The community is waiting!”

Del. Jay Jones, a Norfolk Democrat who is running for attorney general, said that was “unconscionable” and against department rules.

“Body cameras are designed for transparency into police conduct — specifically situations like what happened over the weekend — to provide a clear record of interactions with the public it serves in the field,” Jones tweeted.

“No one is above the law, including those tasked with enforcing it,” Jones said.

It came in a wild night of violence in Virginia Beach in which Deshayla “Shay” Harris, 29, known for being in “Bad Girls Club,” was also shot dead. Police believe she was an innocent bystander.

Ahmon Jahree Adams, 22, Nyquez Tyyon Baker, 18, and Devon Maurice Dorsey Jr., 20, each faces seven counts of malicious wounding and related charges. They remain in jail without bond and will have bail hearings in the coming days after talking to their respective attorneys.