Home » World News » Who are Extinction Rebellion and where are they protesting today?

Who are Extinction Rebellion and where are they protesting today?

SEVEN people have already been arrested this week after shutting down busy roads in the latest Extinction Rebellion protests.

But who are the environmental activists, what do they want and where are they protesting in the UK? Here's what we know. 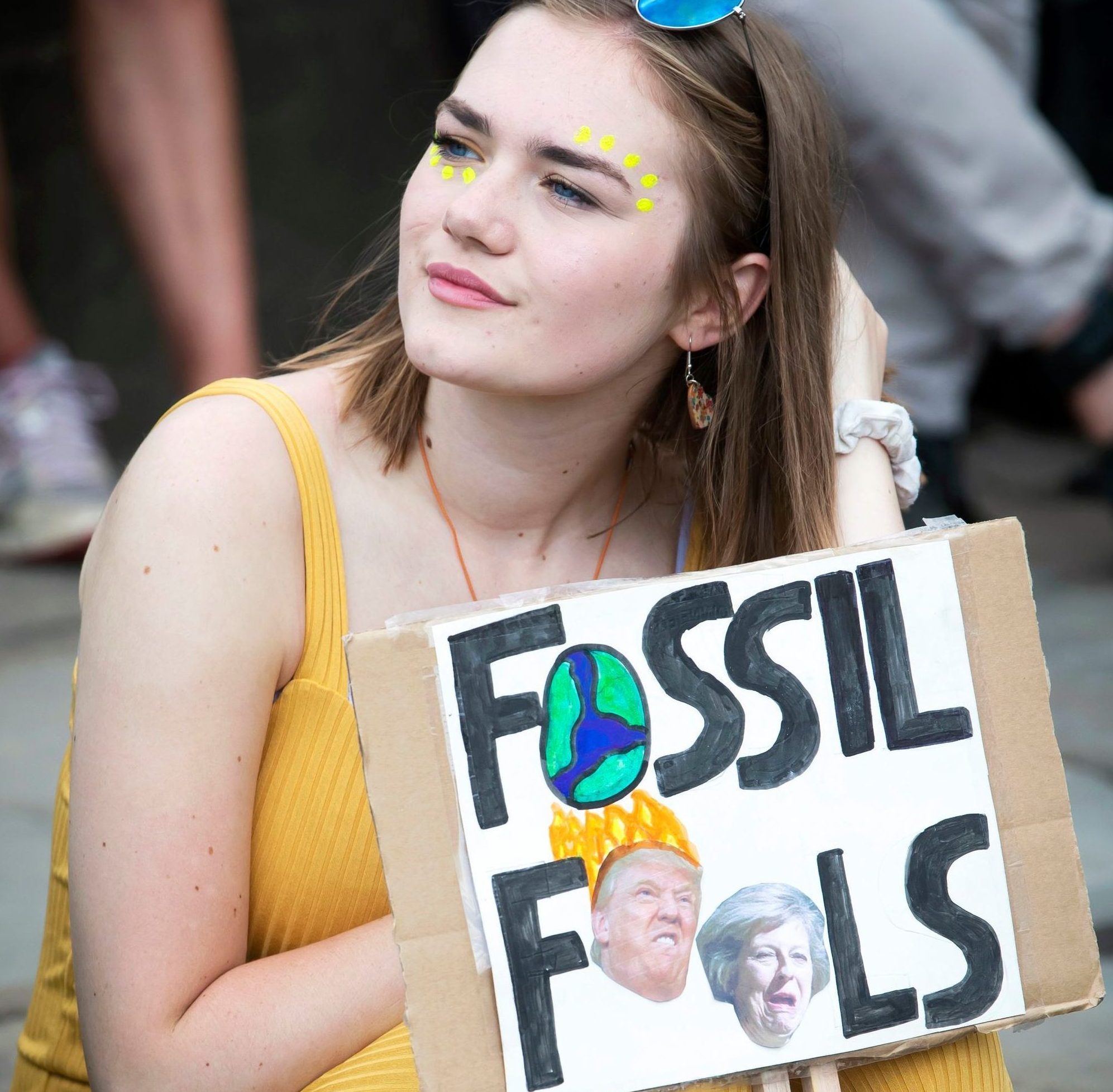 Who are Extinction Rebellion and what do they want to achieve?

Extinction Rebellion describes itself as a non-violent direct action and civil disobedience group.

Its eco-warriors have demanded that the Government declares a climate emergency.

They want politicians to take urgent action on climate change and wildlife declines.

In particular, the activists want the UK to reduce its carbon emissions to "zero by 2025" and do more to "remove the excess of atmospheric greenhouse gases".

On April 15, the environment "rebels" launched a range of attention-grabbing tactics to gain headlines, and prompt politicians into taking action to "avoid irreversible climate change and ecological collapse".

The activists brought parts of busy London to a standstill with widespread demonstrations.

When and where are they protesting?

Protesters covered the Brazillian embassy in London in red paint and blockaded the building.

The group was opposing damage to the Amazon rain forest and violence against indigenous people living there.

The so-called “rebels” have announced a number of training events as “mini festivals of radical ideas” full of talks, teach-ins throughout August.

Risings are planned in Aberdeen, Manchester, Borth, Cambridge, Devon, Brighton and three in London throughout August and September.

One day before the protest in Cambridge, members gathered on a beach in St.Ives “to draw attention to climate change, the extinction of marine life and the threat of rising sea levels”.

Earlier on in August the group targeted the fashion industry, calling for a ban of London Fashion Week in a bid to bring awareness to the excess and damage of over consumption.

Their focus on the fashion industry comes after members discussed the issue of sustainability and fast fashion with a former deputy editor of Vogue last month.

The group have also been making waves down under, after 72 people were arrested and charged by police during “rebellion day” protests in the heart of Brisbane, Australia this month.

Protesters met in the capital to march from Waterloo to Parliament Square on July 19.

On Friday July 19, at 12.30pm, the protest group staged the protest Requiem for a Dead Planet at Northcliffe House in London, headquarters of some of the UK’s largest newspapers, including the Daily Mail, Independent, and Evening Standard.

On July 18, 2019, the group launched a "tax rebellion", calling on the Greater London Authority (GLA) to "immediately stop all infrastructure projects inconsistent with achieving carbon neutrality by 2025.

On Wednesday July 17, the BBC screened its documentary Extinction Rebellion: Last Chance to Save the World? which saw Ben Zand follow the protest group for four months.

The following day, representatives of Extinction Rebellion prepared to meet with senior BBC executives, to discuss how the Climate and Ecological Emergency can be properly addressed.

On July 15, 2019, protesters launched a five-day "summer uprising" in Bristol, Cardiff, Glasgow, Leeds and London by placing five colourful boats to block the roads and bring traffic to a standstill.

There was anger in Bristol, though, when the protest impacted on people being stuck in traffic in emergency situations, including a woman who had gone into labour.

Road blocks also prevented a son from seeing his dying dad in hospital.

Apologising on its website, the activists said: "Extinction Rebellion Bristol would like to express our sincerest regret that several individuals were seriously impacted by our protests. People were not only inconvenienced by traffic delays but there have been deep emotional consequences."

On July 17, members of the campaign group stormed the chamber at Derbyshire county council. Wearing wigs and swimsuits they called for "climate justice now".

In Glasgow, a 25-foot purple boat was used to block the Trongate area of the city centre.

links between banking and the climate and ecological emergency.

A large green boat was set up on the grass in the Welsh capital outside Cardiff Castle as commuters suffered delays during rush hour.

Extinction Rebellion protesters took over Bristol Bridge with a pink boat as Avon and Somerset Police and traffic management used concrete blocks to close the road to traffic.

Extinction Rebellion had threatened to cause disruption by flying drones in June and July, in protest against a planned expansion of the airport.

Police warned those involved they could face a life sentence and urged campaigners to reconsider.

The group has confirmed its plans have been grounded adding the airport would "not have to pause any summer flights".

Radiohead announced they would donate all proceeds from the sale of previously-unheard music to the environmental activism group.

During a five day protest in Edinburgh in June several arrests were made following "non-violent direct action" which saw protesters blocking a major bus route in the Scottish city.

Also that month, thousands of festival-goers took part in a climate change march at Glastonbury Festival.

As part of the Scottish protests, activists also locked themselves to Scottish Parliament.

The activists were unlocked by keys delivered to each of the party leaders, along with a note calling for greater ambition in fighting climate change

In America, arrests were made after the activist group briefly blocked Eighth Avenue in New York  between the Port Authority transit hub and the home of the New York Times.

The protest was to address what XR called "unacceptable" climate change coverage from The New York Times.

In May, Extinction Rebellion were forced to remove misguided prison advice after an em,embarrassing gaffe saw the group recommend incarcerated members "practice yoga".

The "prison guide" on their website came after the group allegedly urged people to get arrested at their protests.

More than 1,100 demonstrators were arrested during protests in May, which brought parts of central London to a standstill.

Police chiefs warned that all 1,100 arrested could be prosecuted.

That same month, the activists published a public letter, urging the ad industry to use its power "to ‘Tell the Truth’ about the climate and ecological emergency.”

In April 2019, there were 11 days of protests, including scores of protesters gathering outside Parliament to get their message across to politicians returning from their Easter break.

The protest action saw hundreds of protesters staging a "die-in" at London's Natural History Museum and held a party at Marble Arch.

But she defended her decision to fly 5,400 miles to join the Extinction Rebellion eco-warriors who massed in Central London.

On April 18, the Met Police said it had "more than 1,000 officers on the streets policing the demonstrations.

"This is putting a strain on the Met and we have now asked officers on the boroughs to work 12-hour shifts."

Extinction Rebellion blocked bridges and busy thoroughfares at peak times, such as Oxford Circus and Marble Arch, along with gluing themselves to a DLR train and the entrance doors of Shell headquarters in the capital.

The demonstrations across Parliament Square, Marble Arch, Waterloo Bridge and Oxford Circus disrupted life for more than half a million people after kicking off on April 15.

They also glued themselves outside Labour leader Jeremy Corbyn's house.

More than 1,150 protesters were arrested over the April demonstrations, with around 180 of them charged so far.

But police were criticised after cops were caught on camera raving and skateboarding with Extinction Rebellion protesters.

Why did activists protest naked in the House of Commons during a Brexit debate?

On April 1, 2019, 11 eco warriors stripped down to their underpants in the House of Commons public gallery while MPs were debating Brexit alternatives on the floor of the Chamber below.

Some had slogans including "SOS" and "stop wasting time" written on their semi-naked bodies.

They pressed themselves up against the glass screen of a public gallery overlooking the Chamber.

Extinction Rebellion said the protest was an attempt "to draw politicians' attention to the climate and ecological crisis".

Speaker of the House, John Bercow, told politicians to "proceed" despite the disturbance.

The incident lasted around 25 minutes, as some protesters had glued their hands to the glass.

Cops said on July 18, 2019, that sentences imposed on climate change protesters who blocked roads and building access in April have failed to deter a repeat.

They have called for tougher controls, particularly as a month of action is planned leading up to Brexit. 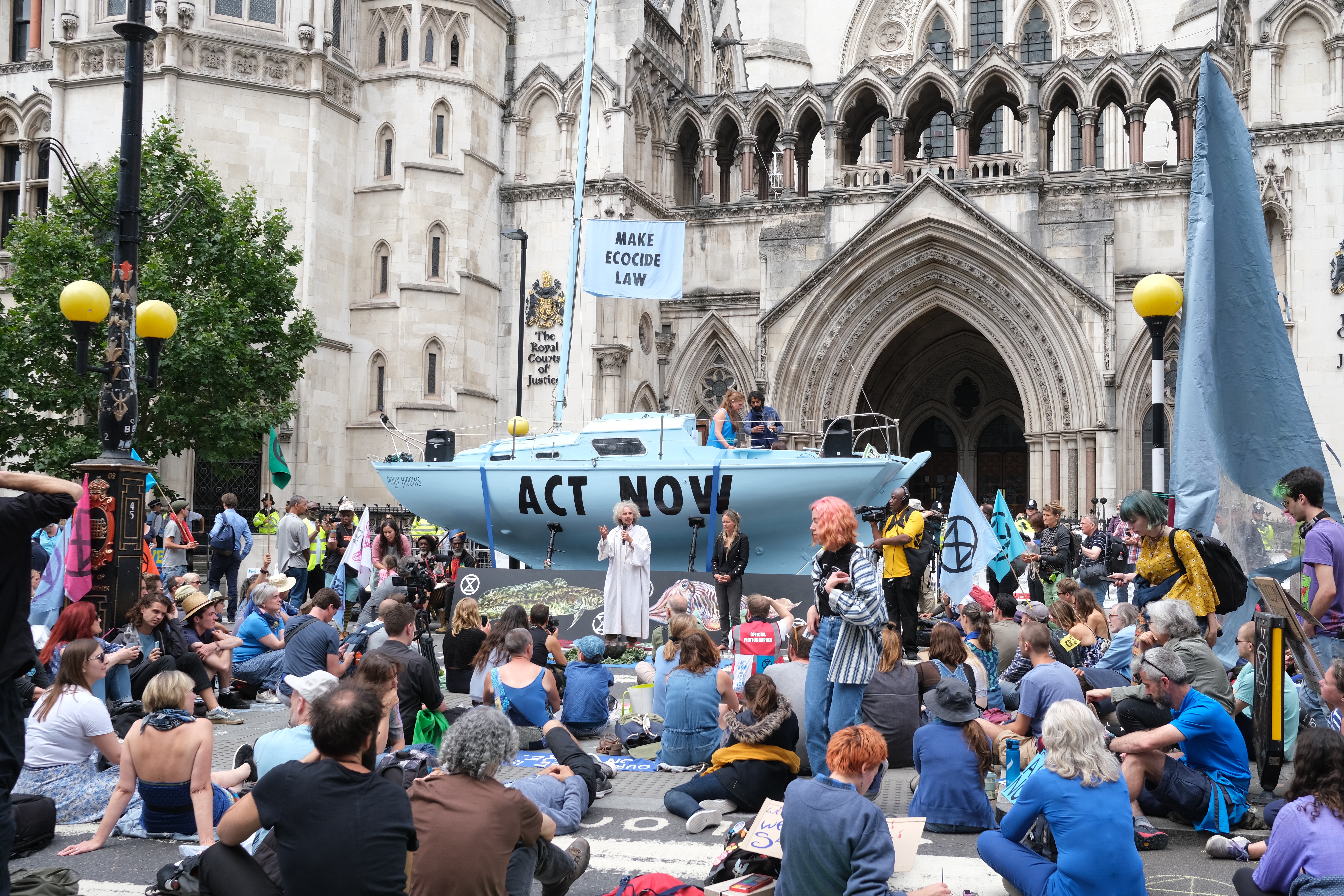 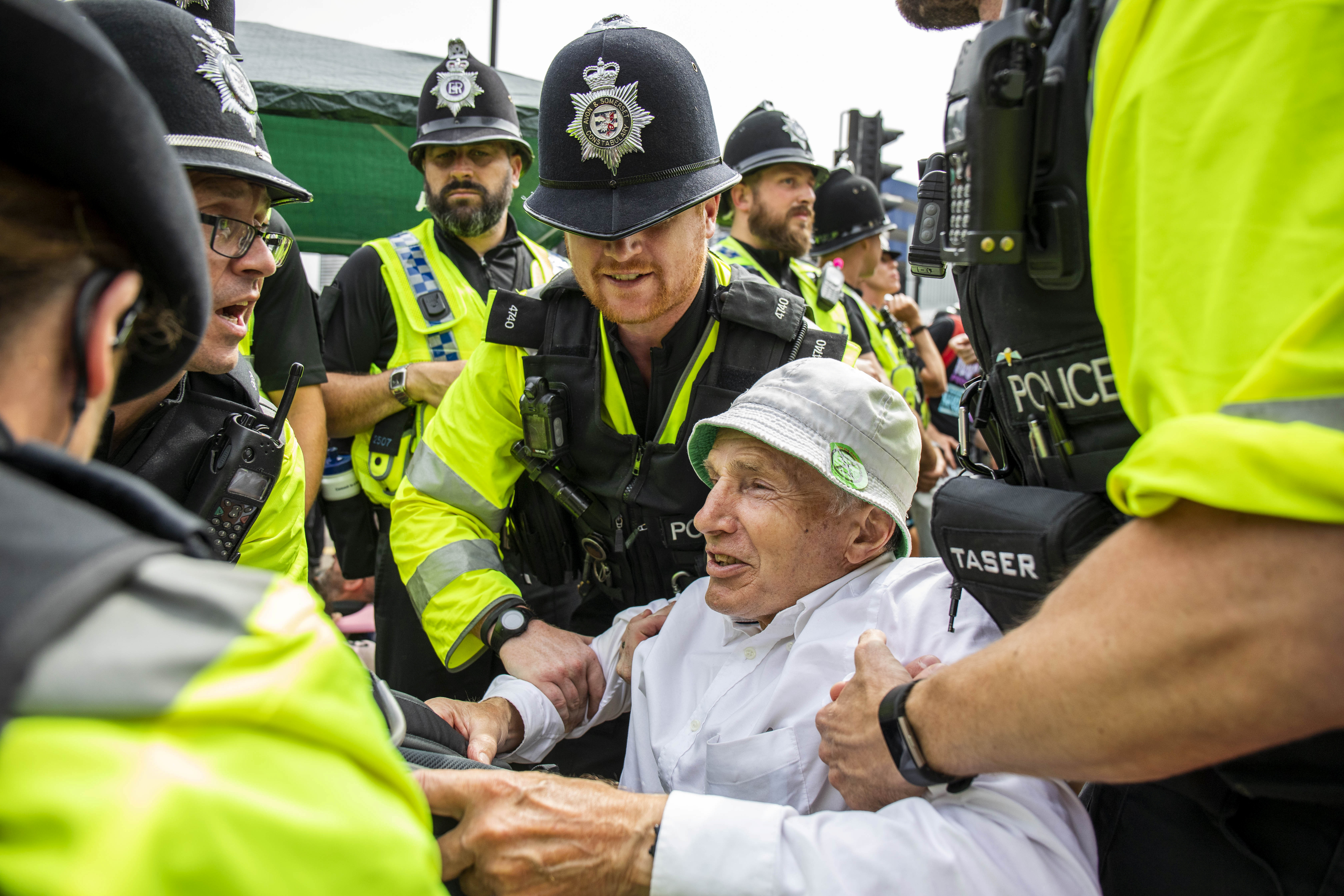 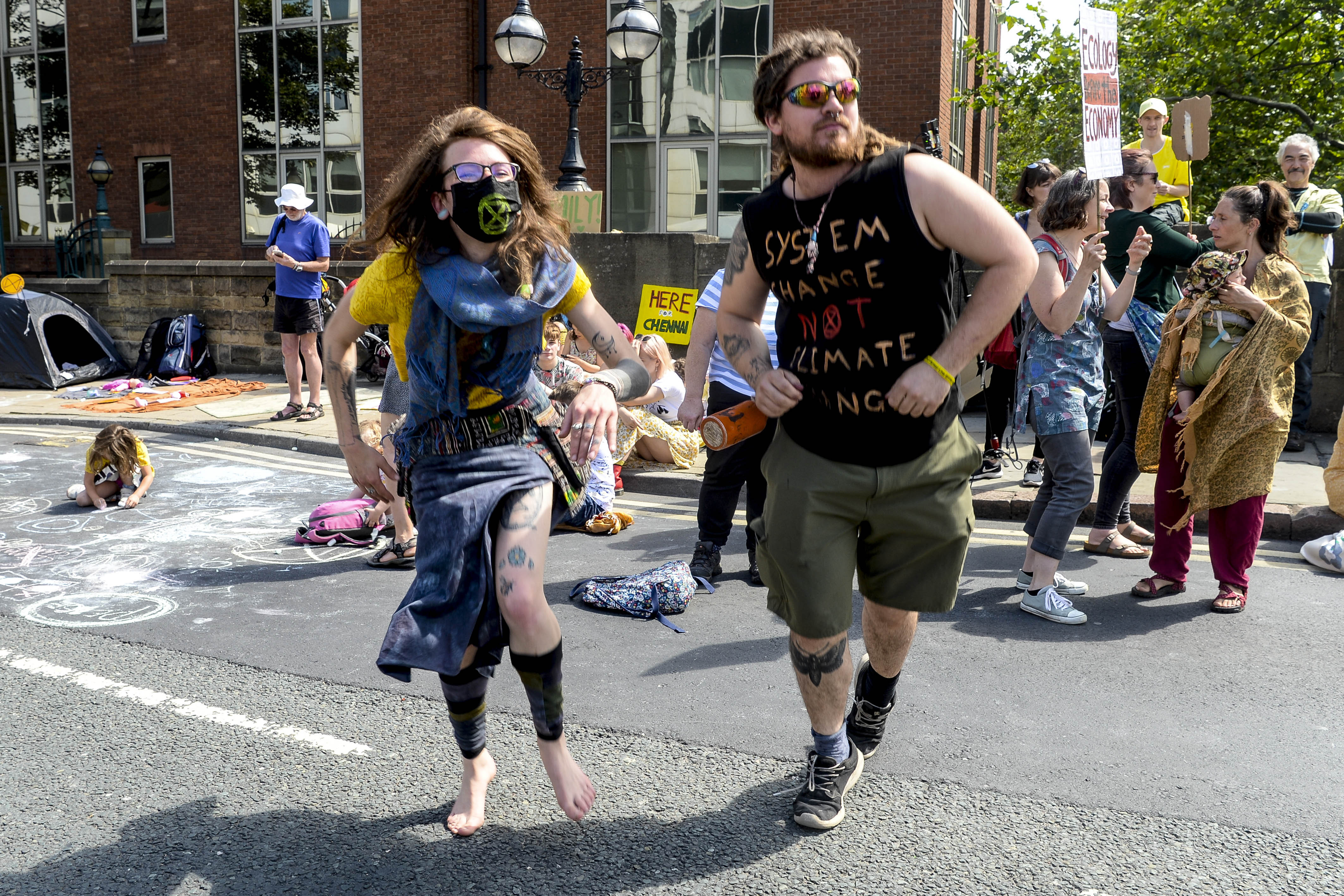 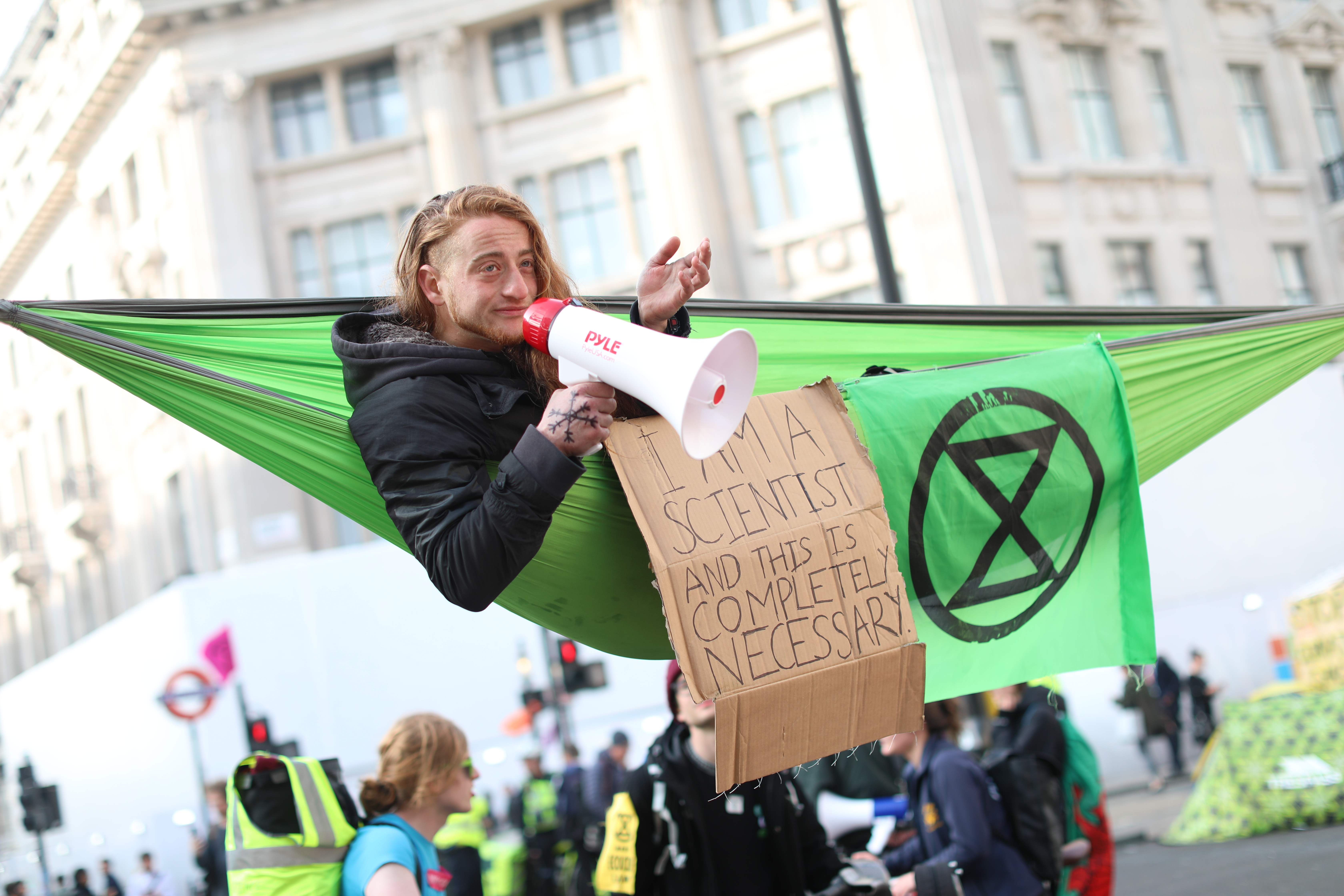 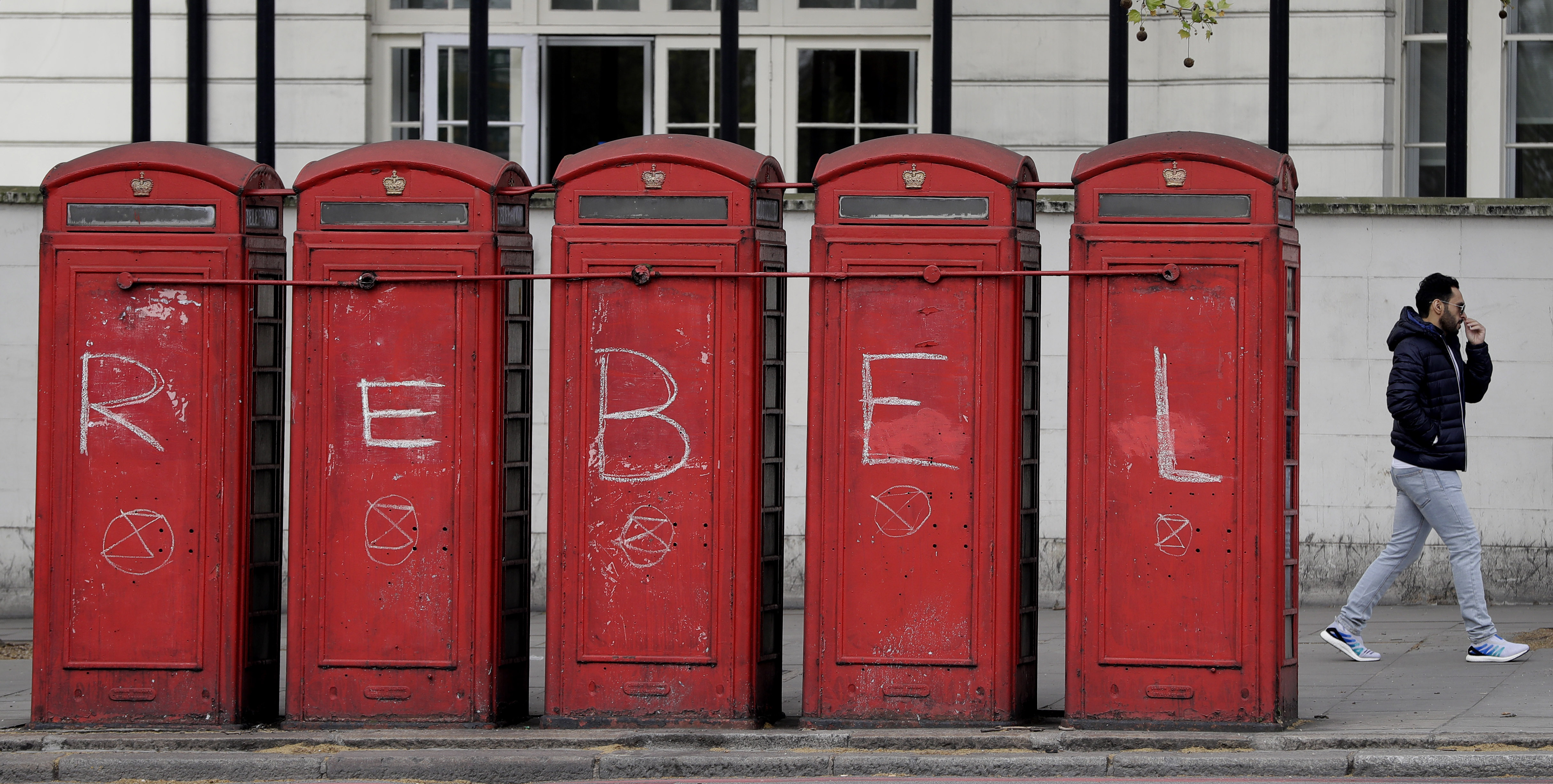 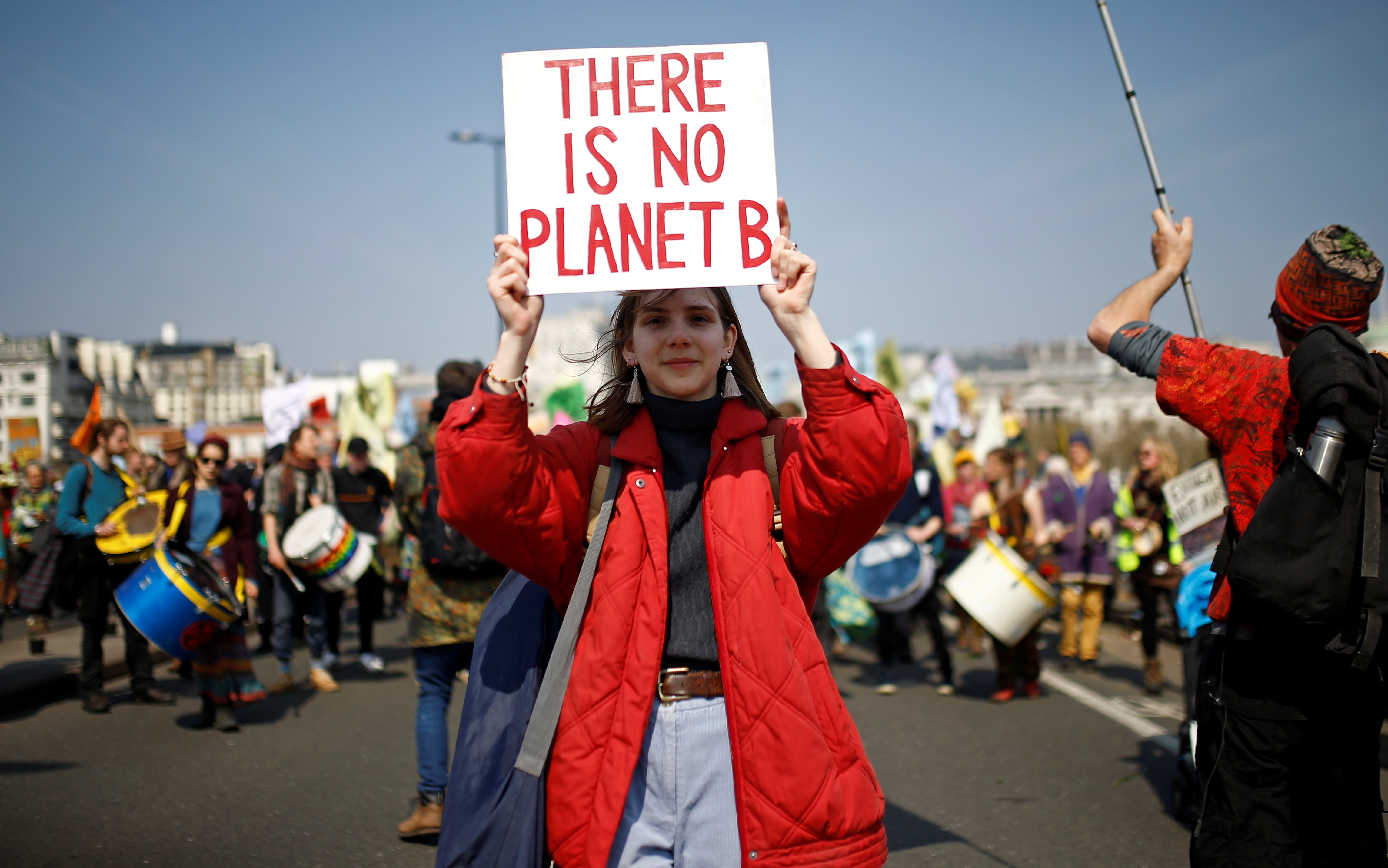 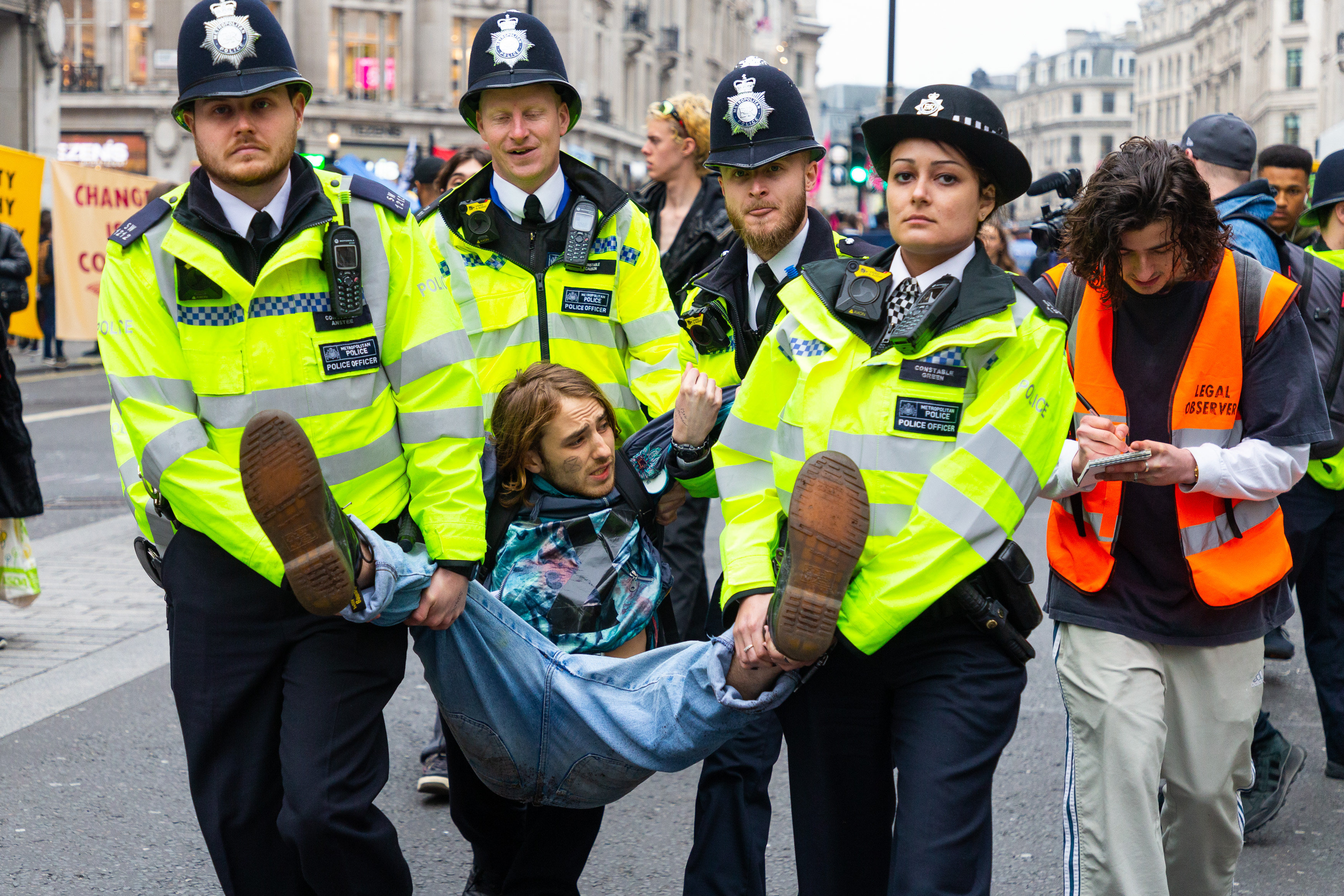 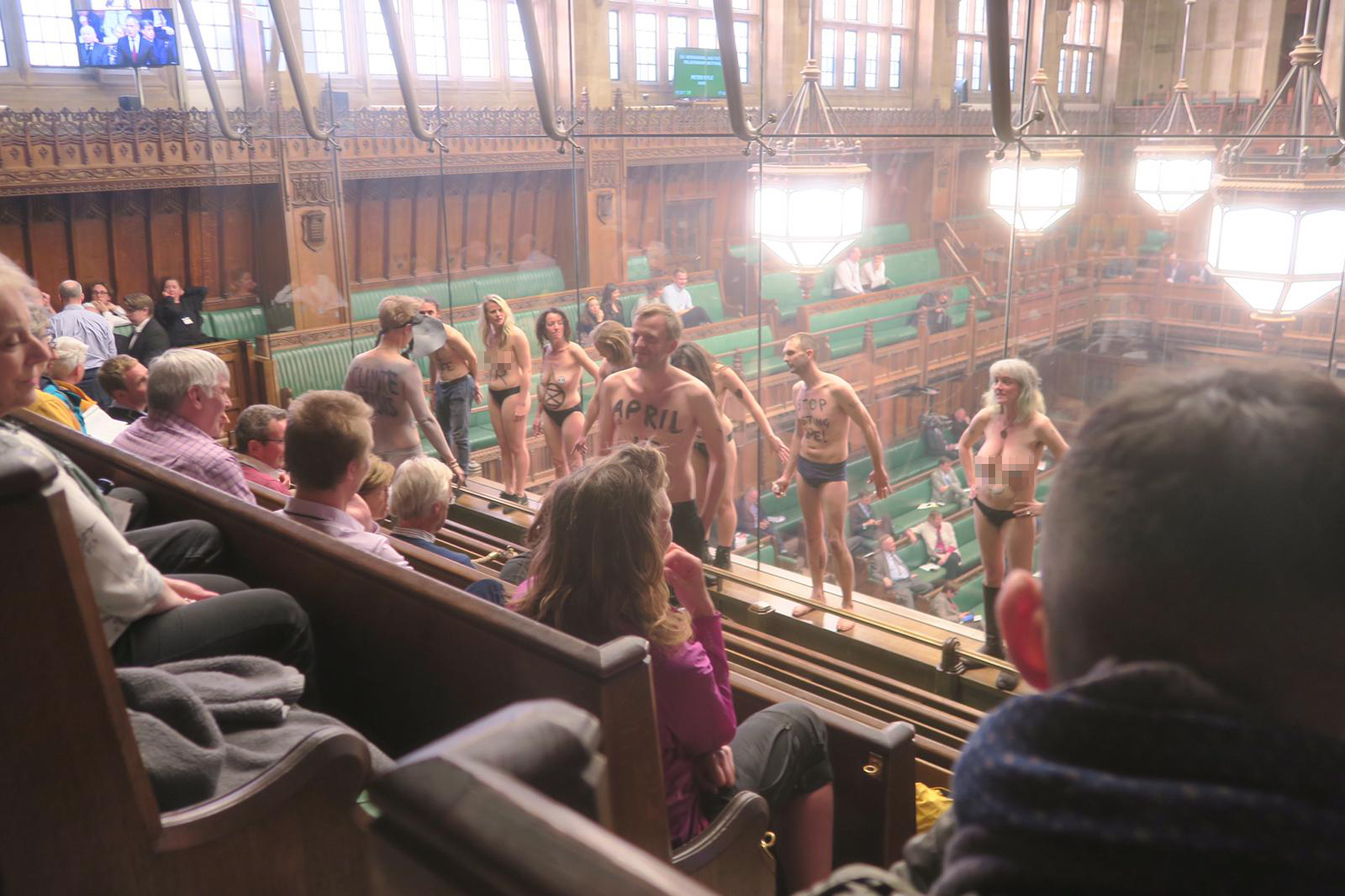 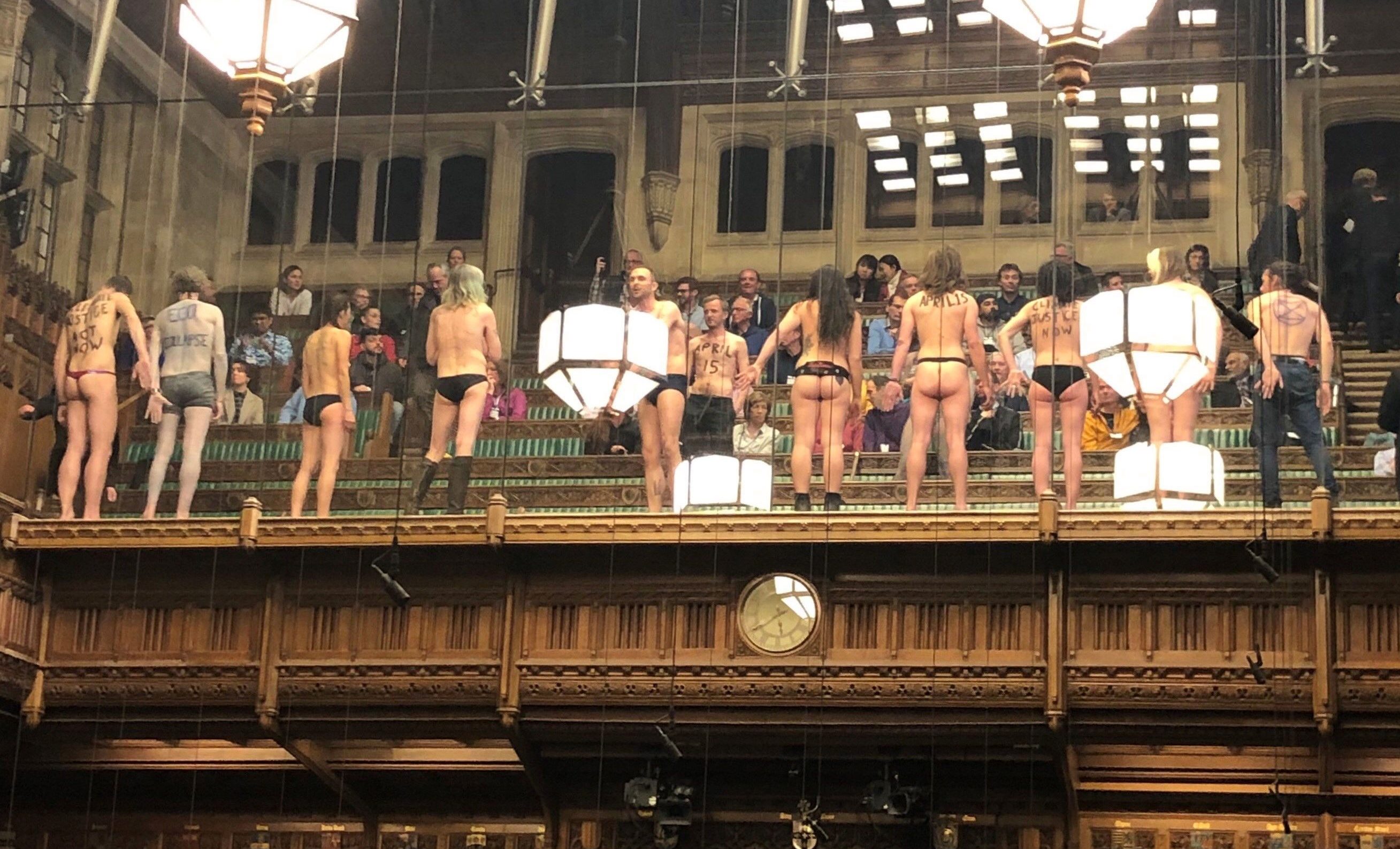 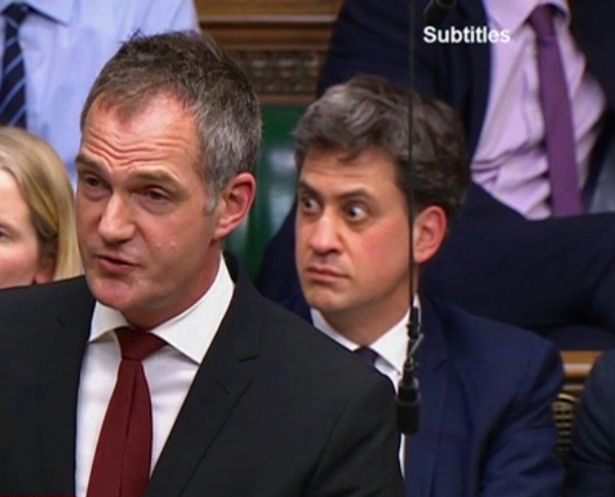